The Dan Skelton-trained three-year-old had looked an exciting recruit when winning his first two starts over jumps, and confirmed that impression with an outstanding performance.

As expected, Harry Skelton sent Allmankind to the front, although he did have Nordano for company until the leader kicked on before the turn for home.

The chasing pack, headed by Cerberus, tried to close the gap, but the Irish raider could not get in a blow.

Allmankind kept up the gallop and the 6-5 favourite crossed the line nine lengths clear of Cerberus, with Nordano plugging on for third, another nine lengths away.

“I was really relaxed watching him, especially when he went up the hill when Harry got hold of him,” the winning trainer told Sky Sports Racing. “I knew if Harry asked him to extend he would do so, and I thought he gave him a magic ride.

“The horse has got a great attitude. He loves to run.”

The winning rider said: “I couldn’t believe how he picked up from three out – not many horses give you a feel like that.

“From three out, for a three-year-old to pick up like that it’s pretty good.”

Allmankind was slashed to 8-1 from 16-1 with Betfair for the Triumph Hurdle at the Cheltenham Festival. 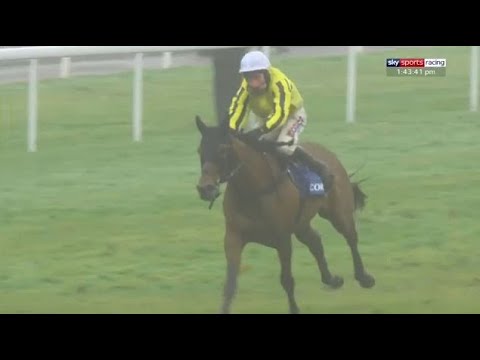