ava
Hong Kong’s longest-serving and winningmost trainer John Moore has been a HKJC fixture since 1971.
The handler is associated with some or horse racing’s greatest champions such as Beauty Generation, Able Friend, Able One, Viva Pataca, Xtension, Dan Excel, Military Attack, Designs On Rome, Werther, Happy Money, Billet Express, Dim Sum and Rapper Dragon.
Moore is synonymous with the Hong Kong Jockey Club’s most prestigious races fielding starters at Sha Tin and Happy Valley in the QEII Cup, Chairman’s Sprint Prize, Champions Mile, Hong Kong Vase, Hong Kong Sprint, Hong Kong Mile and Hong Kong Cup.
Moore who first clocked thoroughbred racehorses one morning at age 18 has reached horse racing's pinnacle; Hong Kong's best-known trainer, a seven-time champion, the city's big-race maestro and the handler of champions, the one with the most wins on the board and stakes money in the bank.
Riding horses was a staple of Moore's upbringing – “it probably goes back to the first time I sat on a horse at one and a half, or two” – he was immaculate in the show ring, and he cut his racing teeth in boyhood pony races against his brother Gary on the family property.
His father, George Moore, was one of the world's finest riders, a champion jockey worthy of the oft over-used 'great' epithet, who achieved fame and fortune not only at home in Australia, but also in Britain, France and the United States; a rider associated with doyens and legends of the turf like Prince Aly Khan and Alec Head, T. J. Smith and Tulloch, Noel Murless and Jim Joel – and the last-named pair's Derby-winning champion Royal Palace.
But, while Gary, two years his junior, was developing towards a career as an elite jockey in his own right – apprenticed at 15 to no less a master than the aforementioned Head – Moore's cricket and rugby at Cranbrook School in Sydney kept him busy most days, including weekends. Afternoons at the races just didn't fit his schedule.
Later an amateur rider who once managed a treble at Happy Valley, he was – in his words – a "pretty unremarkable jockey". Given his father and brother rode winners of the Prix de l'Arc de Triomphe, on Saint Crespin and Gold River respectively, his achievements in the saddle pale in comparison.
--
With so few G1 races on the Hong Kong calendar before the turn-of-the-century, Moore's first arrived 22 years into his training career, in 2007, when Able One and Viva Pataca won the Champions Mile and QEII Cup; remarkably, Moore saddled the same pair to win the same two races fully three years later.
Having found his stride, he didn't falter. The G1 winners kept coming, mostly from his summer European scouting trips: Xtension, Dan Excel, Military Attack, Dominant and Designs On Rome. But success brought a cost, the rising price of those European horses to eye-watering levels. He spread his net wider again; he looked back to Australia for tried gallopers, and in came Werther, Rapper Dragon and Beauty Generation, while the southern hemisphere yearling sales yielded Able Friend and the unfulfilled brilliance of Aethero. 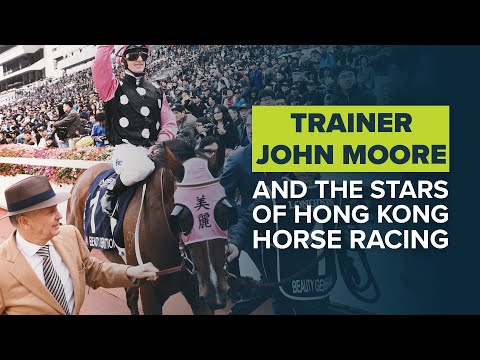 Hong Kong’s longest-serving and winningmost trainer John Moore has been a HKJC fixture since 1971. The handler is associated with some or horse racing...