The front-running eight-year-old, scoring over course and distance for the third time in succession, took on favourite Cyrname early on the final circuit and then outpointed the latter’s stablemate Master Tommytucker up the straight to win by a hard-fought two lengths.

Dashel Drasher, sent off at 4-1, jumped well throughout and, after mastering Cyrname – who was again disappointing and quickly faded to be pulled up – he battled all the way to the line to keep Paul Nicholls’ second string at bay by two lengths.

Somerset trainer Scott was understandably emotional as he reflected on just his second Grade One win – and first in eight years – with a horse he bred as well as trains.

“This is very special, and you could say it was our Gold Cup,” he said.

“I don’t often get emotional, but I definitely had a bit of a welling up there as he won.

“My wife (Camilla) bred his dam – and she went on to win five point-to-points in a row.

“It’s a great thrill – but we had to think we were tilting at windmills against Cyrname.”

Scott need not have worried about that as Griffiths’ determination to put pressure on the favourite from the outset paid off, with Cyrname again failing to rediscover the form which made him the top-rated chaser in Britain after a wide-margin win in this race two years ago.

“At home, he doesn’t blow your socks off – but on the racecourse, he digs deep, doesn’t he,” Scott added.

“Our plan was to put Cyrname under pressure, go out hard and fast.

“But we fluffed the first fence, and Cyrname looked to be cruising away with it.

“But as soon as we got upsides him and went half a length up, he wilted.”

Dashel Drasher, previously successful in handicap and Graduation company this season, was taking a steep rise in class – and also had to turn round Haydock form with Master Tommytucker, who had beaten him by almost 20 lengths there in November.

He has a Cheltenham Festival option in the Ryanair Chase but is no certainty to be going there – this year, at least.

“He’s in the Ryanair Chase, but let’s get him home and see how he is before making any plans,” said Scott.

“He had an injury last year, so we’re not that keen to over-race him.”

Scott reserved praise for Griffiths, adding: “It’s great for Matt, who is a stalwart.

“He broke this horse in, as he does most of the horses, and is an integral part of the team.”

There were some anxious moments on the run-in, after Dashel Drasher made his only slight mistake and then began to look vulnerable – but as he has previously, he found more when asked.

Scott added: “In fairness to the horse, every time he has run here, he has done exactly the same thing – and Matt has always said ‘he’s always got a little bit left up his sleeve’.

“So that was kind of what I was hoping – but I have to say, watching it, I wasn’t quite sure. It didn’t look great!”

Griffiths felt he had to be slightly more conservative at the fences than on earlier Ascot visits with Dashel Drasher.

“Today his jumping was efficient, but that’s all,” he said.

“I couldn’t chuck him at the fences like I’d done before.”

The looming presence of Daryl Jacob on Master Tommytucker was an evident concern too, entering the straight, and Dashel Drasher had to be brave as well as accurate to see off the smooth-travelling runner-up.

Griffiths added: “I was wary coming into the straight that Daryl, was right behind me – and when my horse missed the last it was a relief when he picked up again.

“I’ve been part of his life since the first day he ran, so it’s massive to be associated with the horse.

“It’s a dream for everyone at the yard – and especially for Jeremy, because it is his first Grade One win for quite a while, and it makes it extra special that he’s a home-bred.”

Dashel Drasher has improved dramatically at Ascot of late, despite often jumping slightly left, and Griffiths does not anticipate a significant preference to race right-handed will dictate future plans.

He said: “I think he’ll be fine going the other way – even though he does tend to jump to the left, he never does it violently, and I thought he was a bit straighter today.

“If that was his last run of the season it wouldn’t be the end of the world – because next year he will stay further and he could be a Charlie Hall or Hennessy (Ladbrokes Trophy) horse.”

In the British Horseracing Authority stewards report following the race, a respiratory issued was cited by a representative of Nicholls for the performance of Cyrname. 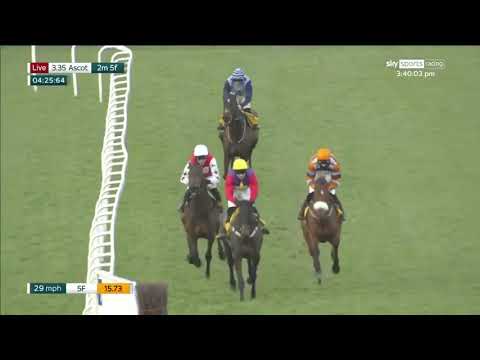