Dettori rode his first winner in Britain when he was just 16, guiding Lizzy Hare to victory at Goodwood in 1987 for mentor, trainer Luca Cumani.
The following season would see him notch 22 winners from 140 mounts and by 1989 he had been promoted to the trainer’s number one rider. He boosted his seasonal tally to an impressive 71 and was crowned champion apprentice.
Plenty had him marked as the next Lester Piggott – in fact record-breaking trainer Mark Johnston has previously said: “No disrespect to Lester Piggott, but isn’t Frankie Dettori just the greatest jockey?” His star continued to rise as he struck up a lucrative partnership with Sheikh Mohammed’s Godolphin operation.
Saturday, September 28 1996 then marked Dettori’s passage into sporting folklore as he punched his way into the wider public consciousness with his ‘Magnificent Seven’ at Ascot – winning all seven races.
In June 2000, Dettori was lucky to escape with his life after he and fellow jockey Ray Cochrane were aboard a light aircraft that crashed, but back in winning action barely two months later, it was business as usual for the all-conquering Godolphin team in the following years, with Classic winners Kazzia and Blue Bunting, Dubai World Cup hero Electrocutionist and Breeders’ Cup Classic winner Raven’s Pass underlining his partnership with Sheikh Mohammed.
Following an appearance on the 2013 edition of reality TV show, Celebrity Big Brother Dettori returned to racing action with much fanfare on Oaks day at Epsom Racecourse at the end of May.
Dettori enjoyed possibly the best year of his career in 2019, riding 18 Group One winners. Some outstanding performers happened to come along at exactly the right time like Cracksman, Stradivarius and Too Darn Hot but none would eclipse the extraordinary mare Enable. She would suffer just two defeats in 14 starts prior to the 2020 season, and her illustrious haul of prizes from 2017 included an Oaks, two King Georges, a Breeders’ Cup Turf and a pair of Prix de l’Arc de Triomphes. 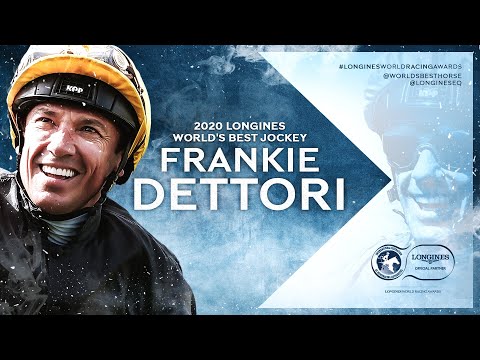 The 2020 Longines World Racing Awards celebrated Frankie Dettori as the Longines World’s Best Jockey of the year. Dettori is the only four-time winner...