ava
Friday Five, September 4, 2020 - some of the best moments from the career of three-time (as of this post) PBA Tour champion Kris Prather.

Prather's first PBA Tour title came in the 2019 PBA Scorpion Championship with a win over BJ Moore in the title match. The 2019 PBA Playoffs earned Prather $100,000 for the championship, which was eventually also credited as an official title.

In 2020, Prather won his first major championship–and another $100,000–when he defeated Bill O'Neill (whom Prather also beat to win the Playoffs) in the Tournament of Champions.

During the summer of 2020, Prather participated in the PBA Tour's exhibition events and won the Strike Derby over Anthony Simonsen in the championship match. Prather defeated GG Mason to earn the right to challenge Sean Rash for the title of King of the Lanes, which Prather secured. Prather then successfully defended his crown against Pete Weber in the final episode of the six-episode series, leaving Prather as the reigning King of the Lanes. 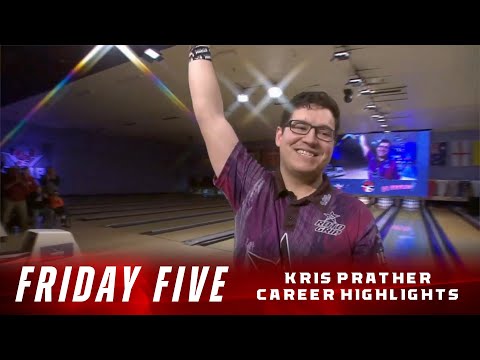 Friday Five, September 4, 2020 - some of the best moments from the career of three-time (as of this post) PBA Tour champion Kris Prather. Prather's fi...