Mike Aulby and Walter Ray Williams both have eight majors, tying for fourth all time. Shown here are Aulby's win in the 1996 Touring Players Championship, making him the first player ever to win the Super Slam of all five majors and Williams' win in the 2006 Denny's World Championship, which tied him with Earl Anthony at the time with 41 career titles (Anthony had not yet been retroactively credited with his two ABC/USBC Masters wins). Tied for second all time are Anthony and Pete Weber. Shown here are Anthony's final title, the 1984 ABC Masters, and Weber's fifth U.S. Open title, won in 2012. The all-time leader in major titles is Jason Belmonte, who broke the record with his 11th major in the 2019 PBA World Championship, shown here. As of this post, Belmonte has 13 majors and has since joined Aulby as the only two players to complete the Super Slam. 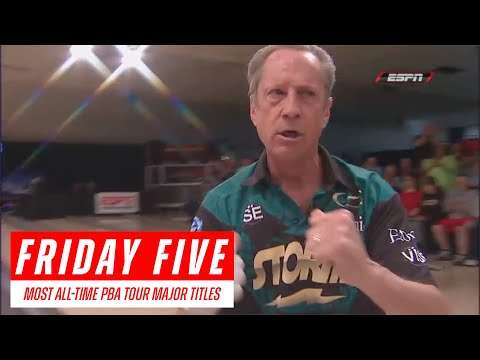 Friday Five, October 8, 2021 - The five players with the most major championship titles in PBA Tour history. Subscribe to the PBA on YouTube: https://...