ava
Jet Cars, Fast Cars and Wheelstanders compete at the "Night of Fire" which is the 4th of July Weekend celebration at Great Lakes Dragaway in Union Grove, Wisconsin.
I don't think I have put together a video with so many 5 second and 6 second 1/4 mile passes ever! Does it seem like Jet Cars got faster recently or what, man this was a great night of action. And the cars that were racing was the Chicago Wise Guys group and they always are in the 6 and 7 second range when making passes and a few of them dip into the 5 second range on a good night, and this was one of those good nights. Crazy to see that kind of mile per hour out of a piston engine car and if you notice sometimes they were pulling the chutes before the finish line.
The Wheelstand cars are always special to me because I just love every second of them. The guy who owns the Ford Pinto named "Chinto" (part Chevy part Pinto) is a friend of mine and he won the Byron Wheelstand Competition last year and is basically King of the hill right now, but he had a nasty crash in this car at this track a week after winning that competition and nearly totaled the car out. He spent all Winter getting it pieced back together and this was his first wheelie in front of a large crowd. So it was awesome to see him back in the saddle once again. He said he was nervous being out there, and to be honest who wouldn't be that just pieced a totaled car out and put it back together quickly. But it all worked out great and is back better than ever. He said he softly brought it down at the 330 ft mark but could have kept it up a lot longer if he wanted to. Wild man!

Thank you so much for watching my videos! Hope you have a great day! Tom 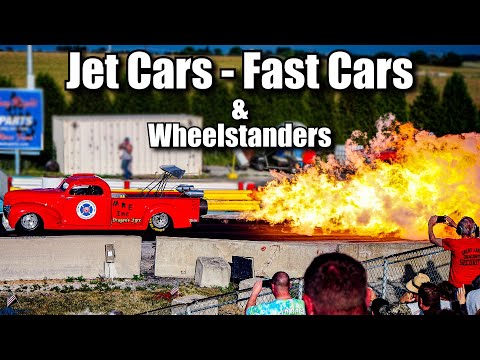 Jet Cars, Fast Cars and Wheelstanders compete at the "Night of Fire" which is the 4th of July Weekend celebration at Great Lakes Dragaway in...