An impressive winner of the Welsh Grand National Trial at the Monmouthshire circuit in early December, the Flemensfirth gelding had been strongly fancied for the big race itself ever since.

And while the three-mile-five-furlong contest had to be abandoned due to a waterlogged track over the Christmas period, he was still allowed to line up under a 4lb penalty, meaning he was 8lb well-in at the weights.

With just 10st 1lb on his back, Secret Reprieve was all the rage as the 5-2 favourite, and his supporters will have had few concerns throughout the stamina-sapping feature, with the lightly-raced seven-year-old always travelling strongly and jumped accurately.

Despite having suffered two heavy falls earlier in the day, Adam Wedge cut a confident figure in the saddle rounding the home turn – and while The Two Amigos refused to go down without a fight and made a race of it, the market leader proved three lengths too strong.

Victory was going to a Welsh-trained runner for the second season in succession, with Potters Corner, trained by Christian Williams, becoming the first Welsh winner since Norther in 1965 when triumphing last term.

Evan Williams said: “It’s more relief than anything else, which is a terrible thing to say. It means an awful lot to us.

“It’s nice tension to have (being the favourite) – that’s what we do it for. That was never a worry as far as I was concerned.

“The worry came today when Adam was on the floor. They patched him up absolutely unbelievably well and Adam deserves the plaudits – how he can ride after having two crunching falls like he’s had, I just take my hat off to him.

“The horse is a joy to deal with. You can never be confident when you’re going over this sort of trip, but in the pit of my stomach I though it would bring out further improvement and it looked to me like he galloped right through the line.”

The Llancarfan-based trainer confirmed afterwards that Secret Reprieve’s girth had broken in the latter part of the race.

He added: “It’s mad how it works out. After the day ‘Wedgey’ has had, I was thinking ‘oh no, he can’t jump the last and then Adam falls off’. It must have happened later on in the race.

“You’ve got the girth with two buckles, which basically keeps the saddle on. Then you have an over-girth with elastic on that goes round the whole lot and without that, Adam would have fallen off.”

The winner received quotes of around 25-1 for the Grand National at Aintree in April, but Williams warned he is not certain to head for the world’s most famous steeplechase.

He said: “The race that really comes to mind is the National Hunt Chase at the Cheltenham Festival. That is only because he’s a novice.

“The reality is that the Grand National would be higher on my list, but I’ll have to talk to Mr and Mrs Rucker (owners) and see which way they want to go and see how the horse comes out of this race.” 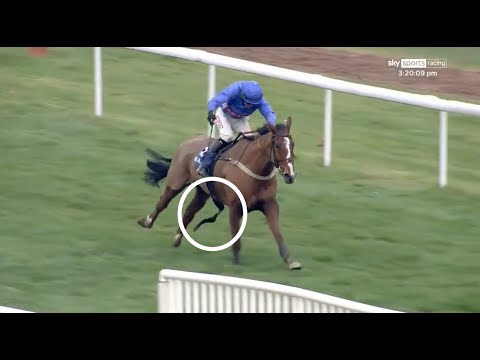