ava
Check out Carl Frampton's post fight interview after his loss to #JamelHerring in the main event of #HerrringFrampton. #CarlFrampton ended up losing the fight and announced his retirement after.

Next up for Top Rank Boxing, if at first, you can’t fight, try again.

Joe “The Beast” Smith Jr. and Maxim Vlasov are headed to the Sooner State to fight for the vacant WBO light heavyweight world title Saturday, April 10 at Osage Casino in Tulsa, Oklahoma.

They were originally scheduled to fight Feb. 13, but Vlasov tested positive for COVID-19 prior to the weigh-in, forcing a postponement.

In the 10-round co-feature, unbeaten heavyweight contender Efe Ajagba will take on Brian “MVP” Howard.

Promoted by Top Rank, in association with Joe DeGuardia’s Star Boxing and Tony Holden Productions, Smith-Vlasov and Ajagba-Howard will be broadcast live on ESPN and ESPN Deportes (simulcast on ESPN+) at 10 p.m. ET/7 p.m. 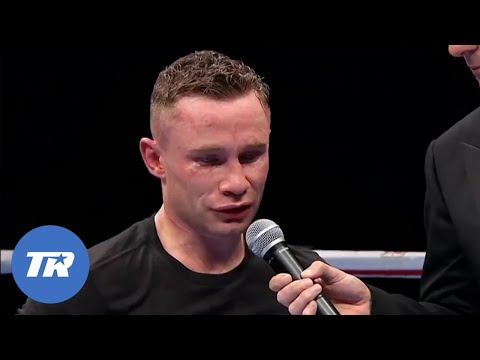 Check out Carl Frampton's post fight interview after his loss to #JamelHerring in the main event of #HerrringFrampton. #CarlFrampton ended up losing t...