ava
Inspiral solidified her position at the head of the betting for next year’s 1000 Guineas with a straightforward success in the Cazoo May Hill Stakes at Doncaster.

Owned by Cheveley Park Stud, the John and Thady Gosden-trained filly was sent off at the prohibitive price of 2-9 having won her first two races stylishly.

A daughter of Frankel, she was settled in the middle of the field by Frankie Dettori in the early stages, as Prosperous Voyage took them along at a sedate tempo.

When the pace quickened at halfway Dettori moved into the centre of the track to take up the running from Banshee.

While she perhaps did not quite display the same startling turn of foot on show at Sandown, the further she went the better she looked.

Dettori gave her one tap behind the saddle and she pulled well clear in the final furlong, taking a while to be pulled up.

Prosperous Voyage stayed on again for second after being outpaced when the taps were turned on, but she was beaten three and three-quarter lengths.

Cheveley Park’s Richard Thompson said: “Having a wonderful filly like this, trained by Thady and John – these are the days we live for and dream about.

“She looks special. It’s fantastic to come up here and see her win the May Hill.

“We’ll go for the Fillies’ Mile first anyway and see how we go.”

Thady Gosden said: “She’s done it very well. Obviously there were a few good fillies in the race and the ground was probably a bit too quick for her, but she showed plenty of class.

“She an exceptional filly, but if you see her walking around here she’s still got plenty of growing to do, so we’d be hopeful she’ll progress through the winter.”

Dettori said: “It was a bit messy as the first two furlongs were slow, she had to learn today to follow a slow pace and then quicken which isn’t her style.

“She’s a work in progress and I think she’ll be better next year when she strengthens up.

“At the moment she’s all frame. I think that (Fillies’ Mile) is where we should go and then she’s got all winter to strengthen up. 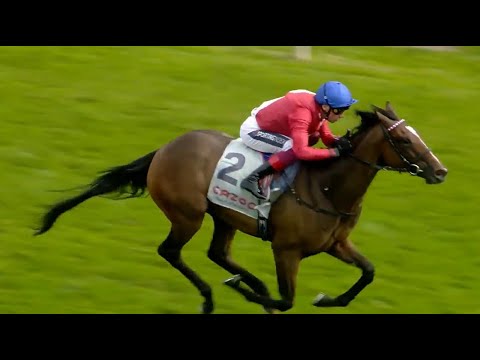 Inspiral solidified her position at the head of the betting for next year’s 1000 Guineas with a straightforward success in the Cazoo May Hill Stakes a...