Omaha was a champion Kentucky-bred American thoroughbred racehorse who won America's Triple Crown in 1935, following in the hoofprints of his sire, Gallant Fox - a Triple Crown hero himself in 1930.

Aqueduct marked the start of Omaha's racing career in 1934 and despite only winning one race from his first nine starts, he did show promise with late finishing bursts after being slow away – a trait inherited from his father.
Coming of age as a three-year-old, Omaha notched six victories at six different tracks in 1935, including the Kentucky Derby, Preakness Stakes and Belmont Stakes.

Omaha had a nasty trait of trying to savage other horses if they came too close or bumped him… It was also said he was too large to fit into a single starting stall.

On January 8, 1936 Omaha was shipped to England aboard RMS Aquitania, with an eye on becoming the first US-trained racehorse to win the Ascot Gold Cup since Foxhall in 1882.

He made a winning debut on foreign soil in the Victor Wild Stakes at Kempton Racecourse (UK) in what was his first attempt on turf and going right-handed, this time under the care of new trainer Cecil Boyd-Rochfort and jockey Pat Beasley.

Stepping up to two miles, Omaha again conquered Kempton in the Queen's Plate in front of an estimated 200,000 fans.

Omaha was sent out as favourite at odds of 11/8 in the Ascot Gold Cup. With one furlong to run, Omaha engaged in a duel with the filly Quashed, ultimately falling short by a nose.

Omaha's final career start yielded a second placing in the Prince Of Wales's Stakes at Newmarket, The Home of Horse Racing in the UK.

Omaha returned home to stand at Claiborne Farm and then the Jockey Club’s Breeding Bureau, siring 85 winners and seven Stakes winners.
He died aged 27 with a record of nine wins from 22 starts.

In 1965, Omaha was inducted into the National Museum of Racing and Hall of Fame. 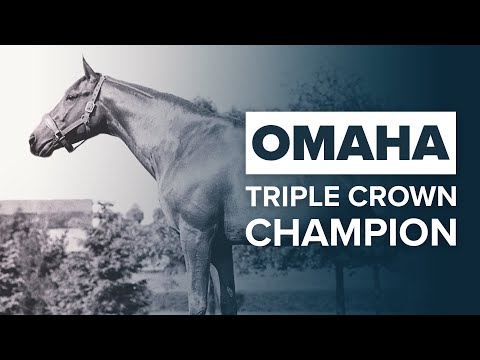