ava
Frankie Dettori is on track to renew his famous association with Enable at Kempton next weekend, after confirming he has received the all-clear from the first of his two mandatory coronavirus tests.

Dettori is currently still in isolation at his Newmarket home, following his return from France and back-to-back Group One-winning weekends at Deauville.

The Italian took the decision to take up those engagements instead of York’s Ebor Festival last week, but expects to be free to ride Enable in the Group Three Unibet September Stakes as she completes her preparation to bid for an unprecedented third Prix de l’Arc de Triomphe in October.

Dettori told Sky Sports Racing: “I had my first test. Obviously, it was negative – and if everything goes well, Monday, if I’m negative then I’m able to leave the house.

“It gives me enough time to come back and ride Enable next weekend.”

Dettori’s schedule is made possible by the elite sportsman category of coronavirus quarantine, which stipulates – as long as two tests are returned clear – he must remain isolated only for eight days, compared to the 14 for other returning travellers from some international destinations such as France.

He drove himself to Deauville, and intends to make the same trip twice more in the next two months – for the Arc, of course, and before then to ride another of his John Gosden-trained superstars Stradivarius in the Prix Foy on trials day before the main event.

The brilliant stayer Stradivarius is set to drop back to the mile-and-a-half trip over which he ran well in defeat in the Coronation Cup as he is readied to form part of the stellar Arc opposition to his record-breaking stablemate Enable.

Dettori confirmed the plan, and nominated Andrea Atzeni as the most likely jockey to deputise for him in October while he rides Enable.

“Bjorn Nielsen, his owner, was always toying with the idea (of running in the Arc) – he almost did it last year,” he said.

“He’s going to run in the Prix Foy, I guess – the 13th (of September), I’ve got to go over, and perhaps get him ready for my good Italian friend Andrea Atzeni, who’s ridden him in the past.

“I guess he’d be the number one candidate to ride the horse in the Arc.

“I’ll do the same thing – isolate one week again – and then do it again after the Arc. I’ll be in ‘professional isolation’ for a couple of (times) this year!”

Gosden’s Palace Pier and Mishriff provided Dettori with Group success on consecutive days in Deauville – and both are due to be seen next in top-level action on Qipco British Champions Day at Ascot, two weeks after the Arc.

The unbeaten Palace Pier will head to the Queen Elizabeth II Stakes, and Dettori believes Mishriff – on whom he himself was merely deputising in place of David Egan at Deauville – is “tailor-made” for the Champion Stakes.

After Palace Pier’s unblemished career record in five starts, most recently in back-to-back Group One wins, Dettori hopes the best may still be to come

“They are the best milers around, and he won decisively (at Deauville),” he said.

“I’ve got to say that he’s one of the best milers I’ve ridden, and I hope more to come.

“I think he is (still improving). He’s only run five times, and I hope he’ll stay in training.

“I’m very keen for him to run in the QEII. He might not be seasoned or experienced enough to take on a Breeders’ Cup this year.

“I would say QEII would be the obvious target – and if we’re going to have a crack (at the Breeders’ Cup) maybe it would be next year.”

As for this year’s French Derby winner Mishriff, he added: “At the moment, I would say Champion Stakes would be ideal. In the past few years, we’ve got soft ground at Ascot, and it’s tailor-made for him.

“At least you’d be going into a race that you know is the right distance at the moment. The Arc has been mentioned – he needs to be supplemented, (so) I’ll leave that to John and the owners.”

One Gosden star who has been out of action this year is Logician, who suffered from an infection through last winter.

The St Leger winner is on the way back, though, according to Dettori.

“I’ve seen him galloping in the stables lately, so he’s due to make a comeback,” he said.

“I’m looking forward to getting him back on the track.

“He’s had a few hiccups on the way, but we know he’s a good horse, and I can’t wait to ride him again.

“He’s got very few miles (on the clock), so you’d expect him to improve.

“He’s missed most of the season, but I hope he’ll make amends perhaps, and we might see him again next year.

“If he stays in training, I’d say he’d be one of those middle-distance, King George-type horses. We have high hopes for him.” 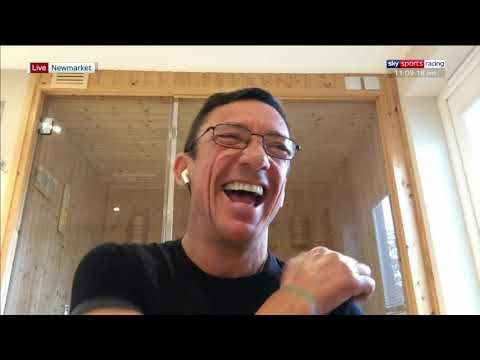 Frankie Dettori is on track to renew his famous association with Enable at Kempton next weekend, after confirming he has received the all-clear from t...