ava
Read the full description for more info on some of Duke's records and clarification on some on-screen stats.

Friday Five, September 11, 2020 - some of the best moments from the Hall of Fame career of 40-time PBA Tour champion Norm Duke.

Duke was 18 years, 345 days old when he won the 1983 Cleveland Open. It was Duke's first title and set the record as the youngest player ever to win on the PBA Tour. The record still stands as of this post.

When the Dallas Strikers rolled 300 in 2016 PBA League competition with Duke as anchor, he became the first bowler to roll an individual and team 300 (Tommy Jones, also a member of that Strikers team, would join that club when Jones rolled 300 in the 2020 Hall of Fame Classic). Duke's individual 300 game came in the 2003 PBA Earl Anthony Classic and was, at the time, officially the 15th in PBA history. After Jason Queen's 300 in the 1997 USBC Masters was retroactively credited as a PBA 300 game, Duke's was–and is, as of this post–the 16th in PBA history.

In 2019, at the age of 54, Duke won his 39th and 40th titles in back-to-back weeks. It was the first time in his career he won two consecutive events, claiming the title over Jason Belmonte in the Indianapolis Open and winning the following week over Anthony Simonsen in the Jonesboro Open. Duke became just the third player in PBA Tour history to win 40 titles, joining Earl Anthony (43) and Walter Ray Williams Jr. (47).

Winning three consecutive majors in 2008 (the last two of the 2007-2008 season and the first one of the 2008-2009 season) made Duke the first–and, as of this post, only–player to win three consecutive majors. He won the 2007-2008 World Championship and 2008 U.S. Open to close that season, then opened the 2008-2009 season with another World Championship victory. You may notice the TV graphics note Duke's 2008 U.S. Open as his fourth major, but it is actually his fifth. Duke's win in the 1994 USBC Masters wasn't yet officially recognized as a PBA Tour major title (it would be credited prior to bowling in the 2008-2009 World Championship, as can be seen on that telecast noting Duke's sixth major).

Duke's win in the 2008 U.S. Open also made him the fifth Triple Crown (World Championship, Tournament of Champions, U.S. Open) winner in PBA Tour history as well as just the second Grand Slam winner (after the USBC Masters was retroactively credited as a major title). Mike Aulby was the first Grand Slam winner and Belmonte would join the three-person club at the 2020 U.S. Open. Duke is missing only the PBA Players Championship to complete the Super Slam, which only Aulby and Belmonte have accomplished. 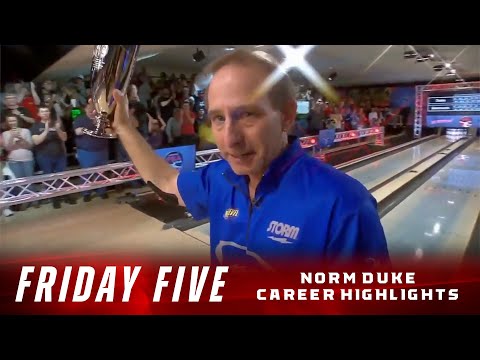 Read the full description for more info on some of Duke's records and clarification on some on-screen stats. Friday Five, September 11, 2020 - some of...