admin
Olympic Gold medalist Rebecca Soni, demonstrates Freestyle Kick Breaststroke Drill in this #swimisodes. We teach at our Race Club swim camps: http://theraceclub.com/swim-camps/ that About 80% of the propulsion in Breaststroke comes from the legs. Knowing that more than any other stroke, breaststroke relies on the power of the kick for propulsion, Reb Soni has reinvented the breaststroke technique. At the Race Club camps, we use a progression of drills to let swimmers understand the importance of the legs in breaststroke. When it comes to freestyle kick breaststroke, we have swimmers use their fins to emphasize the power behind them and so they can focus on their arms and upper body.

Better than any other swim drill, Freestyle Kick Breaststroke teaches swimmers how to derive more power from the kick by using the head and upper body. The kinetic energy of the upper body and head driving forward and down, when coupled with the kick, results in more distance swum from that driving motion. The fins also help to elevate the shoulders which leads to more coupling energy as the upper body moves forward. We also do this drill to practice hand quickness, getting a small but powerful pull through the water and hands back in front over the water into the streamline position in time for the next kick.

Zach Hayden does an excellent job of demonstrating this more traditional breaststroke, as he pushes the elbows together underwater before elevating the hands over the water into the streamline position. Rebecca uses a different technique that adds more power to her kick. Rather than push the elbows together on the underwater pull, she keeps them elevated near the surface, arches her back to elevate much more for the breath, then pulls the elbow behind her chest, hesitating slightly before she pushes the hands and most of the forearm forward out of the water to reduce frontal drag. By delaying the motion forward of her arms, she sacrifices some power of the pull but adds the additional mass of her arms to her body and head moving forward to create more energy to augment her powerful kick. 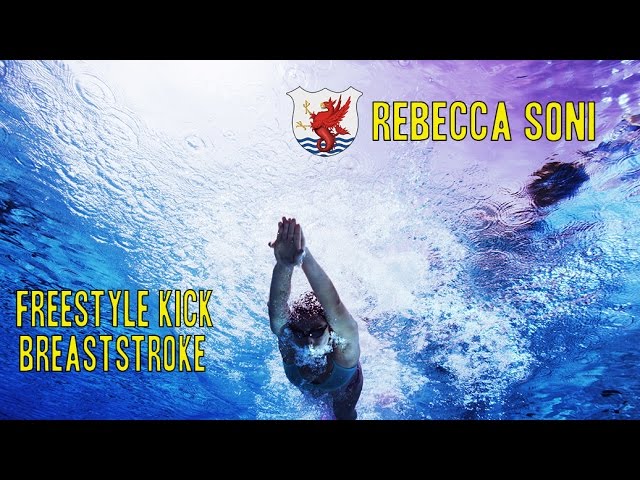